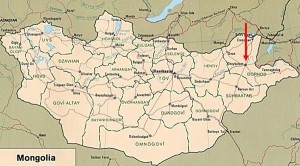 Choibalsan is the capital city and the main population base in Dornod province. It is situated along the north bank of the Kherlin River, 650 km east of the capital Ulaanbaatar. During the Soviet era, a large number of military personnel; support staff and their families were stationed in and around Choibalsan. At the end of the 1980’s, it is estimated that more than 100.000 soviets were using the city for their business needs and thereby substantially contributing to the establishment of Choibalsan as an important centre of commerce in the east of Mongolia. 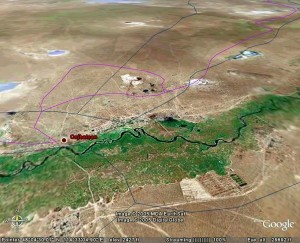 At this time, the city’s population was in excess of 300.000. However, in 1990, in a pre-arranged manoeuvre, executed with military precision, the entire soviet presence was withdrawn from Choibalsan. Even up until the actual point of evacuation, in a final but dramatic display of soviet control, local Mongolians were unaware of their neighbours’ intentions. The entire withdrawal from Dornod was apparently completed within a period of a few hours.

THE CITY IN THE PRESENT TIME

The resulting lack of economic backing and financial subsidies resulted in a drastic and total collapse of Mongolia’s economy. In Choibalsan, the city’s main power plant stopped working; the population in a desperate attempt to survive, resorted to stripping former soviet homes for fuel to burn. The absence of trees in a once green landscape; the empty factories; and the now bedraggled city is testimony to the hard times. 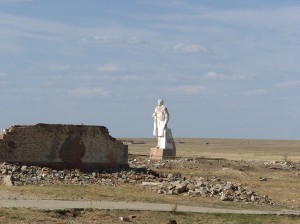 Perhaps the city’s outskirts provide the most graphic evidence of the impact of soviet abandonment and the collapse of an empire. In the city’s former Russian west end, all that remains intact amongst the stripped apartment blocks and the industrial ruins, is a defiant Lenin, standing proudly above the rubble. Like Chenghis Khan centuries before him, whose image also appears everywhere, the symbolism is crude but clear.
Half the population of Choibalsan live in a complex of Russian built apartment buildings. These are of a typical soviet style, five stories high, and identically ugly. The rest of the population live in the ‘ger districts’. (Anna Home is situated in the northern ger district).
The ger districts are characterised by an un-navigable network of hashaas; speeding cars whose sadistic drivers have no respect for human life; and a species of murderous dog. The ger districts have electricity but no mains water or any recognisable system of treating sewage. Poverty in the ger districts is high.

A hashaa is an area of land with a fence around it usually located on the outskirts of urban centres. The enclosure provides safety and a degree of privacy for the houses or gers situated within it. A ger is a circular felt tent which serves as a traditional means of accommodation, as well as a way of life, in Mongolia. Although warm and dry, the houses are often ramshackle in appearance. However, the hashaa is a common sight in Mongolia and a traditional means of planning and organising streets in the city outskirts and small countryside townships. 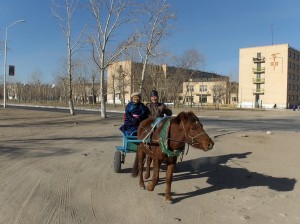 The city has relatively little motorised traffic, and most of the cars in working order tend to be old. Most people walk; some travel on horseback or by horse and cart. It is not unusual to see a camel and cart being driven through the town. In and around Choibalsan there are some paved roads in varying degrees of disrepair. However they are a blessed relief in comparison with the murderous network of potholed and undulating dirt tracks that make up the hundreds of square kilometres which surround the city. Outside Choibalsan, the nearest paved road is around 300kms away.

At the present time, the population of Choibalsan is around 45.000. Although unemployment in Choibalsan is generally high, there is a greater proportion of women working and earning money. Not only in salaried employment but also within the informal sector. In fact, women in general seem to have assumed total responsibility for providing for their family’s needs. They appear more industrious, resourceful and eager to escape the bonds of poverty than their male counterparts. 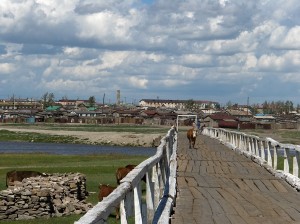 Male unemployment is particularly high (around 60%). Although there are other contributing cultural factors, large scale alcoholism and the accompanying domestic abuse issues which are sadly all too evident in Choibalsan can to some degree be attributed to it. Many people in the rural areas move to Ulaanbaatar in the hope of a better life.
According to official and anecdotal accounts, including government and mining speculators’ reports, the province is rich in minerals including uranium and oil. Chinese, American and Canadian mining companies are currently examining the possibilities for its exploitation. It would seem therefore that all hope for a rapid economic upturn and perhaps a better way of life lies in the ground. And there’s a lot of ground in Dornod. 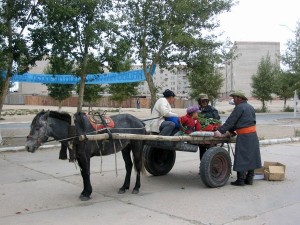 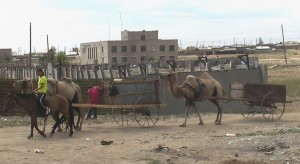