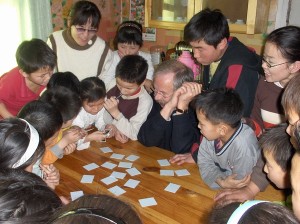 From Choibalsan I can bring you the latest news about Anna Home. After a stormy reception (“Martien!”, 25 hugs, songs, dances) I felt soon at home again and we played games. Everybody is well. 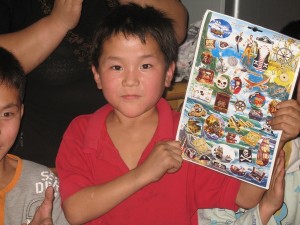 In Holland Sinterklaas birthday is celebrated on December 5. In the beginning of November we sent 2 big boxes by mail. Except for pepernoten, taai taai and other Sinterklaas cookies, for every child there was a chocolate letter and a little present. These children never get a personal present. Watching the look on all the faces during the unwrapping and the enthusiasm about the content were quite an experience. Each of them waited for his turn, it all went very disciplined. 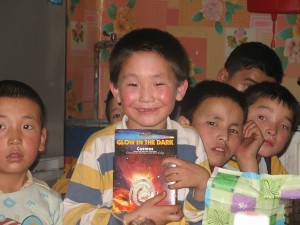 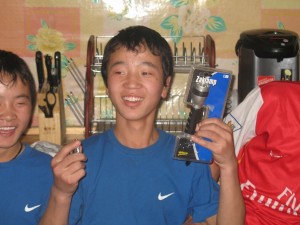 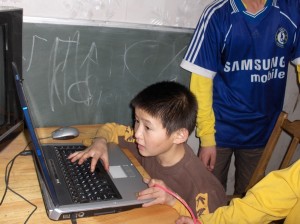 And then there was the old laptop of our daughter Eva, meant only for the children and for nobody else. They will make a schedule to offer every child the opportunity. At the end I glued glow in the dark stars on the ceiling, tuned a little clock and was demonstrated a calculator that had the correct answer on 2 * 9. 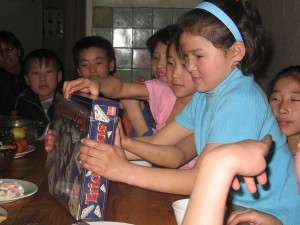 The church of Voorschoten gave the game Triominos which appeared to be a big success. They play it daily.

Albert Hein, the former CEO of Holland’s biggest, multinational, chain of supermarkets received a present when he retired. He wanted a statue of a housewife with a shopping bag and on it he had the following inscription made: “So that we do not forget for whom we work”. That inscription came directly to my mind when we went out to get Ganzorig. 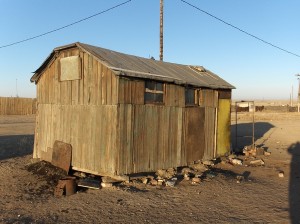 There was a space for him because one of the boys went back to his mother. The family history is somewhat complicated: one of the children in Anna Home is Ganbat. He has an older sister and she has a child, Ganzorig, 4 years old now. But this sister disappeared completely and she left the boy with her mother, his grandmother. Ganbat wanted very much to get his little “brother” to Anna Home.
We found him in a wooden shed. The only warmth came from coal that his grandmother finds on the streets around the coalmine. There the lorries leave fully loaded and sometimes they loose some. During her search for coal and through the garbage of the city she leaves Ganzorig at home, alone, in the cold. 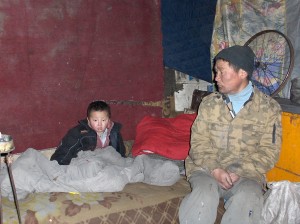 He was sleeping when we came. On the photo is also Ganbat’s father, who shows up every once in a while. He did not want to shake hands with me because they were too dirty, as was the rest of him and his wife. In the house were two beds and a stove. On the Floor was some gnawed meat and two kittens walked around. No water, no electricity. I don’t believe that I have ever seen such poverty. And that is where Ganzorig lived, without many chances for a future. 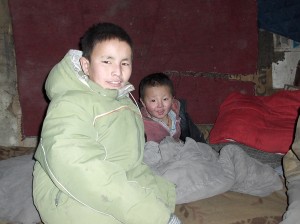 Until now, because he really wanted to go with his big brother to Anna Home. 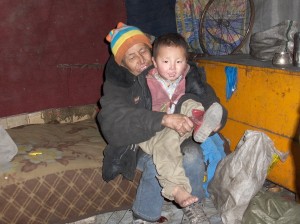 His grandmother put his clothes on, but socks and underwear were not part of that. “He does not have those”. Nothing else than the dirty clothes he was wearing. Miraculously she had an identity card of him, which gives him, among other things, the right of free health care.
Cheerfully he went into the car, the first time in his short life as he tol dus. 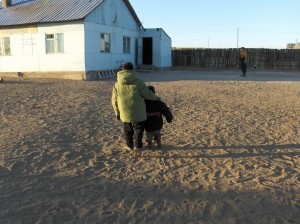 His big brother brought him home: and there awaited a warm-hearted reception by the other 23, who all the same got a not-asked for new mate. And this one is so young. 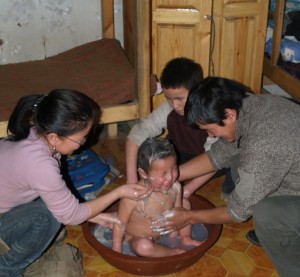 Everybody participated. Water was heated, clothes were sought (which were all too big) and the house was showed. In an united effort he was put in a bathtub and scrubbed. This, I think, was also for the first time in his life and highly necessary. He loved it. 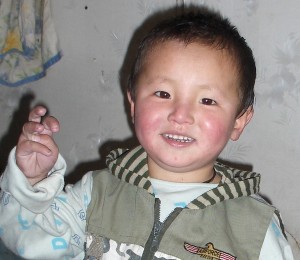 The result was astonishing.
He taught me again “for whom we work”.

May I invite you to have a look on the website of Nynke Laverman?  During her new show she will pay attention to Anna Home. The première will be on March 14 in Amsterdam.
The preparations for the renovation and enlarging of the house in the summer of 2009 are in full swing. There now is also a big sum for a new fence around the hashaa.
Many people contributed and are still contributing through a monthly money transfer and I can not repeat often enough how well this money is being spent. Thank you very much!
Very soon you will find the budget for 2009 on this website and in January we hope to publicise the results of 2008, which will then have been checked by a local accountant.
Maarten